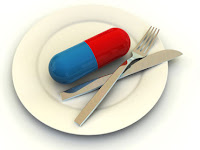 In one of the more subtly surreal news stories I’ve read in recent months, Reuters reported yesterday that researchers have uncovered a “master gene” in body fat that regulates other genes associated with obesity-related issues such as diabetes and cholesterol.

In a study published in the journal Nature Genetics, the British researchers said that since fat plays an important role in peoples’ susceptibility to metabolic diseases like , heart disease and diabetes, the regulating gene could be target for drugs to treat such illnesses.

“This is the first major study that shows how small changes in one master regulator gene can cause a cascade of other metabolic effects in other genes,” said Tim Spector of King’s College London, who led the study.

This all makes for cool science and all, but one thing struck me as odd. Other than a passing mention that type 2 diabetes “is often linked to poor diet and lack of exercise,” at no point in the article did the reporter feel compelled to point out that obesity is also linked to poor diet and lack of exercise. The whole perspective felt very much as though it’s just an accepted fact that we’re a massively overweight society, so instead fixing it, lets just work within that paradigm. “Hey, you’re gonna be fat no matter what, so let’s stop trying to fix that. Here, have some pills so that you can be fat and live longer!”

I agree that this research is important. I have overweight friends who I would very much like to benefit from it, but I’ll also be the first to tell them that a pill to switch off their diabetes should be plan B.

Sure, weight-loss is a zillion dollar industry, but it doesn’t hold a candle to Big Pharma, who are more than happy to let the world plump-up. That way, they can eagerly applaud scientists who discover how to better flip our gene switches, so that they can develop drugs that work around a problem that could actually be solved by a daily walk and a daily apple.

But no one profits when you go for a walk – except you.