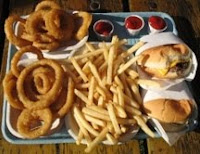 Why are American kids getting fat? A new University of Michigan study looking at 1003 Ann Arbor sixth-graders reveals all kinds of reasons. While a generally junky diet didn’t seem to make a difference, obese kids tended to drink more soda, exercise less, and watch more television. And the biggest surprise/not surprise of the study was that school lunches made a huge impact. Kids who ate school lunches were 29% more likely to be obese than kids who brought lunch from home.

In case you’re curious, here’s what’s on the menu today at my daughter’s elementary:

For the record, it is the only time all week that a green vegetable shows up, the only other vegetable being the golden sweet corn that accompanies Thursday’s hamburger – although I’m betting that’ll be overshadowed by the tater tots. And, honestly, if you set down a tray of fried cheese and green beans in front of your kid and walked away, which one would he or she plow into?

I let my kid have school lunch once a week. I hate it, but I understand the gave-and-take of parenting. I don’t want her to be that one “tofu kid” that every school has. I remember the tofu kid from my grade school. He was anemic and played violin. Of course, he is now so rich that he could buy the entire internet, were he not too busy real estate flipping Caribbean island nations, but his childhood pretty much sucked.

I digress. My point was that school lunch, to my daughter, is a decadent pleasure and that’s just wrong. There are underprivilaged kids with subsidized school lunch who have no choice but to eat that crap every day. I doubt they’re complaining, but their wasitlines, arteries, and insulin levels sure are.

Last December, Obama announced the Healthy, Hunger-Free Kids Act of 2010, which is supposed to clean this mess up. The webpage includes a “before and after” sample menu including, ironically, cheese sticks on Wednesday:

And here’s the recommended improved menu:

That would be awesome, but I don’t see it happening. Those congressmen and senators are going to take one look at what it would cost to feed our nation’s children like that and laugh. Their kids all go to private schools anyway, so why look out for other people’s kids? That’s not the American way! Let them eat cake!

And for the record, I googled “Tony’s Famous Mozzarella Sticks” and got nothin’. If they’re not on Google, they’re not famous. Truth in advertising, you peddlers of portliness.