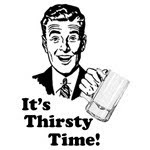 As I sat down with my cup o’ joe this morning, I was amazed to discover the shear amount of beverage-related news lighting up my My Yahoo page. A more conspiracy-oriented Real Fitness Nerd might blame this on the fact that I spilled a glass of water on my keyboard a couple days ago, accidentally giving my Mac some form of crude artificial intelligence, so now it’s searching the internet for information about that which gave it life.

But that would be silly.

Instead, I think it’s because we’re a society oddly driven to drink calories in constantly new, increasingly unhealthy forms and now, those who realize how wrong this is are clashing head-on with the sugar junkies and their corporate dealers. To wit:

The National Consumer League, a Washington consumer-advocacy group, filed a formal complaint with the Federal Trade Commission requesting it investigate Coca-Cola’s marketing claims for Vitamin Water. The league said the brand touts more benefits than it can deliver.

“Vitamin Water: Flu shots are so last year,” reads one advertising poster for the product.

In its complaint, the league said Vitamin Water ads say the drink not only promotes a healthy immune system but can also replace the flu shot.

And the sad thing is, people are stupid enough to believe that this thickly-veiled sugar water is actually healthy. But at the end of the day, although the stuff is supposed to be 50 calories a serving, each bottle is 2.5 servings, or 125 calories, almost as much as a can of Coke. And who doesn’t drink the whole bottle? Shove as many synthetic micronutrients into it as you want, it’s still 30 grams of unregulated sugar just buckin’ to jack up your insulin and induce type 2 diabetes faster than you can say, “I can’t possibly be obese, doctor. All I drink is this healthy water substitute.”

The Deceptively Vile Starbuck’s Trenta. From a University of Missouri press release:

Starbucks recently announced a new-sized 31-ounce drink, the “Trenta,” which will be in stores this spring. The mega-sized coffee joins the ranks of other energy drinks that can pack plenty of caffeine and calories. Ellen Schuster, a University of Missouri nutrition expert, says that Americans should be wary of extra calories and sugar in the quest for bigger, bolder drinks.

“The sheer size of new coffee and energy drinks increases consumers’ potential for unhealthy calorie and sugar consumption,” said Schuster, state specialist for MU Extension and the College of Human Environmental Sciences. “A ‘Trenta’-sized Starbuck’s lemonade could include 21 teaspoons of sugar – much more than should be consumed at one time, or in one day.”

More like Tenta, as in, if you drink one of these every day, the only dress that’ll fit you is a tent. And what’s with the 31 ounces? Do they think that if they slide in one ounce under a Big Gulp, they’ll hold some sort of moral high ground?

21 teaspoons of sugar aside, that’s a massive amount of coffee. You long-term Nerd Herders out there know that java and me are like two peas in a caffeinated pod, but three 8-ounce cups is plenty, and when I do splash out (literally) and pour myself a fourth, it’s over the course of a whole morning. I don’t blast through it all in one heart attack-inducing go.

What sucks about Starbucks is that they are a sugar shack wolf wearing the sheep’s clothing of being a coffee house – a place that sells “real” drinks with at least a vague notion of nutritional value, so people are lulled into believing that when they drink their ultra frapacapchinotastic chubbity-chub-chub latte, they’re just having a cup of coffee. On the other hand, no one can be that stupid. I think people believe what they want to believe.

The Deceptively Vile Non-Alcoholic Energy Drinks. From a University of Maryland press release:

Highly-caffeinated energy drinks – even those containing no alcohol – may pose a significant threat to individuals and public health, say researchers at the University of Maryland School of Public Health and Wake Forest University School of Medicine.

In a new online commentary in the Journal of the American Medical Association (JAMA), they recommend immediate consumer action, education by health providers, voluntary disclosures by manufacturers and new federal labeling requirements.

“Recent action to make pre-mixed alcoholic energy drinks unavailable was an important first step, but more continued action is needed,” says University of Maryland School of Public Health researcher Amelia Arria, who directs the Center on Young Adult Health and Development. “Individuals can still mix these highly caffeinated energy drinks with alcohol on their own. It is also concerning that no regulation exists with regard to the level of caffeine that can be in an energy drink.”

Believe it or not, I actually fall on the other side of the fence here. As I commented a few months ago when The Man banned caffeinated alcoholic beverages, you can’t stop people from drinking “dangerous” beverages. Prohibition kind of proved that, so just cool your heels, Elliot Ness.

The Deceptively Vile Tap Water. From the Los Angeles Times:

The Environmental Protection Agency took steps Wednesday to curb toxic substances in drinking water, including perchlorate, a chemical thought to threaten the thyroid gland that has contaminated hundreds of public water wells, mostly in California.

The agency also moved to set standards for 16 other substances that can invade water supplies and impair human health.

Perchlorate, a remnant of California’s manufacturing, aerospace and military bases, can inhibit thyroid hormone production, especially in fetuses and infants. That can lead to lower IQs and developmental delays, studies have shown.

Didn’t see that one coming, did ya? I would have loved to end this post with a snide fix-all, telling you guys to stick with plain, old water. Indeed, from a diet and weight maintenance perspective, it’s the ideal, but somehow, humankind has gone and messed this one up too. Tap water is full of chemicals and bottled water can be even worse, considering it’s even less regulated than the toxin-laced H2O that comes out of our facets.

So what’s a thirsty fella to do? I’m not sure. My solution was to buy a water filter. I got a Pur system, but according to my research, they do the same thing Brita filters do, so just get the one with the best price. If you’re currently drinking bottled water, the $30-$40 will pay for itself in a few months. Or you could do what I did on a trip to Vietnam a few years ago and just drink beer when you don’t know where your water is coming from. Believe it or not, a couple beers a day is a far healthier option to pretty much every sugary beverage listed above.

Just don’t drink a Trenta’s worth.