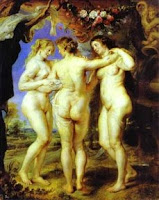 I’m of two minds about two new papers coming out in the journal Nature Genetics regarding obesity and genetics. On one hand, thumbs up to the smart-ass who named the group producing the papers the “GIANT consortium” (Genetic Investigation of ANthropometric Traits). Also, I concur that genetics plays an important role in your size. However, I have a tough time with the notion that anyone but the tiniest minority of humans weighs 400 pounds due to wonky DNA.

Joel Hirschhorn, MD, PhD of Children’s Hospital Boston and the Broad Institute, a senior author on the overall obesity paper and involved in both, says, “Different people have different susceptibilities to obesity. Some don’t rigorously watch what they eat or how much they exercise and still resist gaining weight, while others constantly struggle to keep their weight from skyrocketing. Some of this variability is genetic, and our goal was to increase understanding of why different people have different inherited susceptibility to obesity.” Because most of the genes newly implicated in these studies have never been suspected of having a role in obesity, findings from both papers begin to shed light on the underlying biology, which may lead to better categorization and treatment of obesity in the future, Hirschhorn notes.

The fact that obesity rates continue to skyrocket tells us that our terrible diet and lack of exercise are the culprits. How can anyone possibly say otherwise? I challenge anyone to show me a person who eats sensibly and exercises 3 or 4 times a week and is still obese – I’m not saying pleasingly plump, I’m saying flat-out fat. Do I know people who toe the line but still have a little junk in the trunk? Certainly. But there’s a big difference between being a little heavy and being obese. If your body wants to have a few curves, there’s nothing wrong with that. You’re not fat, despite what society tells you.

Between the ages of 18 and 40, my weight has ranged from a hefty 220 to my current svelte 165 (9% body fat, if you’re asking). During that time, it’s become blatantly obvious that my attractiveness to woman (or men, if that’s how you roll) directly corresponds with my size. I suspect there are two reasons for this. First, as much as women would like to believe otherwise, I suspect you’re every bit as superficial as us boy pigs. Second, the thinner I am, the more confidence I probably have – thanks to what society has taught me about having a little extra meat on my bones. And odds are, that sense of confidence probably spreads across my entire life. Sadly, the skinnier I am, the happier I am. I’m not saying that’s right and I’m working to fix that, but it is what it is.

So what’s my point? I’m concerned that designating genetics as the cause of a weight problem is just going to give people an excuse to say, “It’s not my fault. I’ll be fat no matter what, so pass the donuts,” whereupon those who might normally just be a little plump (but still perfectly healthy) will wobble with a false sense of hopelessness into obesity. Instead, I think we should work a little harder at teaching people how to eat right and exercise and how to be happy with their bodies, curves and all. And since I’m playing true confessions today, I include myself on the list of people who need educatin’ on that second point.