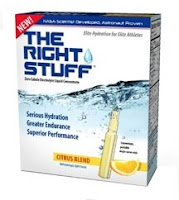 Apparently, budget cuts hurt NASA as much as the rest of us, so they’ve had to branch off into the sports drink trade. The Right Stuff is a zero-calorie electrolyte liquid concentrate designed to hydrate everyone from astronauts to elite athletes. From the press release:

“We developed the hydration formula to perform optimally under the most extreme conditions. The health of our highly trained astronauts was paramount,” explained John Greenleaf, now a former Ames research scientist and inventor of the formula. “With all that Americans and the government have invested in the space program and our astronauts, this is one clear way to protect and maximize that investment. And now the general public will benefit from this research as well.”

The novel electrolyte formula contains a specific ratio of key ingredients, sodium chloride and sodium citrate, for rapid restoration of hydration. These electrolytes, dissolved in water, optimize the levels of sodium ions in the body. The beverage is an isotonic formulation that restores both intra- and extracellular body fluid volumes in dehydrated astronauts, athletes and others.

The drink will run about $2.70 a pop. Jeez. At that price, you think they’d throw in some carbohydrates or protein. Apparently, you don’t need to worry about glycogen stores or muscle synthesis in outer space.

By the way, I learned about this stuff from CrunchGear and I am humbled by their reporting. In just three paragraphs, the reporter managed to milk the premise for every conceivable gag. Furthermore, the comments are awesome, particularly “My body says ‘The Right Stuff’, but my budget dictates Tang.”