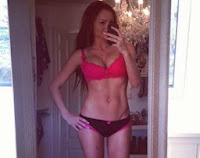 Norwegian “Fitness” Blogger Caroline Berg Eriksen probably thought she was pretty rad (or “råd” as they say in Scandinavia) when she posted this slinky selfie just four days after giving birth to her daughter. Turns out, she pissed a lot of people off, getting raked across the internet for being “obscene” and “genetically freakish.”

I’m going to avoid the name calling here. However, I will point out that this woman probably knows jack shit about “fitness.” What she knows about is being skinny. If she did know about “fitness,” she’d know the devastating effect an underfed pregnancy can have on the “fitness” of an unborn child.

In 1944, towards the end of WWII, the Nazis blockaded the western part of the Netherlands, denying the occupants access to food and fuel. People were forced to live in 500-1000 calories a day for months. The resulting mass starvation became known as the Dutch Hunger Winter.

The only upshot to this horrific event was that scientists were able to collect data and study its effect on the survivors–particularly the children conceived during starvation. Despite going on to have long, prosperous lives, these kids grew into adults weighing 14 pounds more than people born in the same area just six months later. They were also three times more likely to have heart disease and experienced increased cognitive decline later in life.

The main theory for why this happened has to do with a relatively new field of science called epigenetics. While we’re born with the genes that we’re born with, the idea is that external forces–diet, stress, toxins, etc–influence which genes are turned off or on. In this case, the trauma of being underfed in the womb may have activated genes that caused these people to be predisposed to holding onto emergency fuel stores–or body fat–later in life.

So chew on that, Thin Mint.

Is Eriksen just a genetic freak who didn’t gain any weight during her pregnancy even though she ate right? Frankly I don’t care. The big takeaway here is that she’s supposed to be a role model for a lot of women who aren’t genetic freaks–and who certainly won’t look like that four days after dropping a puppy despite the fact that they’re going to try really, really hard.

One thought on “Let’s shame this skinny mom–with science!”