Television you can taste?

Now, researchers in Asia have found the perfect way to combine the two–television you can actually taste. Indeed, it’s the Holy Grail of American consumable consumerism.

Just to be clear, it’s not like you actually lick the screen. (Although that would be cool, kind of like James Woods in Videodrome.) Instead, the team at The National University of Singapore have developed The Digital Taste Interface, which allows you to lick a little electrode thingymabob hooked to a computer (or television) which sends signals that electrically and thermally stimulate your tastebuds. One of the suggested applications for the technology is that cooking shows could allow viewers to “sample” their recipes.

At first, I was all, “Wow, man. That’s groovy.” But the more I thought about it, the more I got a bad taste in my mouth. (Please tell me you saw that coming.) Ya see, our tastebuds are there for a reason. Not only do they trigger enzymes that begin the digestive process, but they start a cascade of hormones that regulate feeling of satiety. Research has already shown that artificial sweeteners tweak your body’s ability to know when it’s eaten the right amount by disrupting the brain reward pathways. Imagine the kind of damage licking your iPhone every time Rachael Ray was on the Food Network would do? (That sounds more perverted than I intended, but I’m leaving it because she’s pretty cute and, well, maybe, subconsciously, a more subversive notion did occur to me. Just sayin’.) 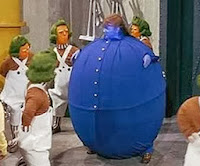 When you boil it all down, these researchers have managed to combine Willy Wonka’s Everlasting Gobstopper with his Three-Course-Meal chewing gum. Move over Philip K. Dick, it looks like Roald Dahl is the new slightly-troubled, twentieth-century literary visionary to watch. Hopefully, the Digital Taste Interface will go the way of Smell-o-Vision, because if it takes hold, it may not turn us all blue, but it’ll certainly make us all the rounder–and that’s one Golden Ticket I’m not interested in.