Reverse Racism in the Produce Section!

Purdue University held an incredibly bizarre roundtable recently called White Vegetables: A Forgotten Sources of Nutrients in which they defend fair-skinned produce such as potatoes, cauliflowers, turnips, onions, parsnips, mushrooms, corn, and kohlrabi. From what I can gather, this righteous indignation has erupted, in part, because, “U.S. dietary guidance encourages consumption of a variety of fruits and vegetables, including at least 1 serving of a dark green and 1 orange vegetable daily. However, no such recommendation exists for white vegetables.”

It’s my guess that the roundtable was led by Plastic Man, given the enormous stretches in logic and common sense written into the executive summary. Case in point, the advocating of kohlrabi, an obscure cabbage relative popular in Germany, in the introduction. Yeah, that’s a super accessible veggie alright. All Americans should eat that, for sure! Maybe we should make a point of advocating durian fruit and Peruvian yak butter while we’re at it.

Furthermore, what the hell kind of shotgun list of foods is that? Mushrooms, corn, onions? These are incredibly diverse veggies that all serve very different functions. The reason there’s a leafy greens group is that spinach, kale, lettuce, they all do basically the same thing and contain many of the same nutrients. Corn and mushrooms on the other hand? It’s like asking who makes a better grilled cheese sandwich: R2D2 or The Blob? There’s just no connection.

Further furthermore, Americans get all the corn and potatoes they need. Suggesting they eat more is just a license for an already obese nation to eat more tater tots. We don’t need to recommend increased potato consumption. We need to recommend the right way to eat a potato. And even then, when people do eat them right–baked or mashed–they tend to slather them with butter, sour cream, and bacon. Ultimately, the poor, flavorless potato suffers the curse of the artichoke. It’s an intrinsically healthy food that has culturally become a vehicle for crappy pastes and sauces.

I think the problem lies in the disconnect between scientists and, well, the whole rest of the planet. The keynote speaker for the roundtable discusses the flaws in the “eat the rainbow” philosophy of veggie consumption, which espouses the benefits of eating as many different colors of produce as possible, as to reap the benefits from the various phytonutrients that create those colors. His feeling was that “Although aesthetically pleasing, the colors of food may mislead the consumer as to the effective content of nutrients and phytochemicals.”

This moment he started to justify this with “Human vision is limited to a small window (390–765 nm) of the electromagnetic spectrum,” I knew we were in for a rough ride. As scientists oft do, he’s taken metaphorical advice literally, missing a huge aspect of the “eat the rainbow” philosophy: It’s not about color, it’s about variety. A variety of veggies means a variety of nutrients, phytonutrients or not. You just can’t argue around that.

And by the way, the “eat the rainbow” thing comes from holistic circles, where “white” is considered a color like all the rest and white veggies are plugged regularly, particularly for their phytonutrient value. Sulphoraphane, which you’ll find in cauliflower, is a detoxifier, and allicin is a great anti-inflammatory that you’ll find in onions and garlic–a white vegetable that the executive summary completely stonewalled in favor of kohlrabi.

And by the by the way, if you go to the USDA dietary guidelines website, corn, potatoes, cauliflowers, mushrooms, and onions all have their own pop-up boxes, whereas broccoli, kale, and lentils do not. Elitist veggie bastards! 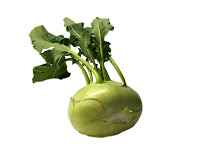 Although, in the roundtable’s defense, kohlrabi isn’t mentioned at all on the USDA site. Now, that’s just not right. Stop the insanity! Clearly, some sort of kohlrabi advocacy group needs to be assembled and I think I know just the scientists for the job…