Two Weapons in your War on Nutritional Terror

Everyone’s favorite toothless watchdog, the FDA, announced last week that it plans to look into consumer understanding of fortified foods. According to Food Navigator USA.com, the goal is to figure out whether people think unhealthy snacks jacked up with vitamins and mineral are healthier options.

Of course, the results of this study will have no bearing on future policy because, seriously, why should a consumer advocacy organization utilize the thoughts and perceptions of consumers? That wouldn’t make any sense!

As it stands, the FDA doesn’t have much in the way of hard-and-fast food fortification rules. Rather, it has a set of suggestions and “does not encourage indiscriminate addition of nutrients to foods.”

In other words, the FDA don’t got yo’ back. To wit:

The Ballad of Diet Coke Plus

Once upon a time, a massive multinational company to remain nameless created a product called Diet Coke Plus. It was a fortified, zero-calorie soda with questionable labeling that led consumers to think the product was good for you. The FDA didn’t stop the company, but in 2008, sent them a strongly worded letter claiming the word “Plus” on the label made them feel icky. They thundered that the company had violated the Federal Food, Drug, and Cosmetic Act and that they had 15 days to do something about it, lest they feel the wrath of…

Well, actually, the wrath of jack shit. Letters from the FDA like this aren’t legally binding, so the unnamed multinational company that makes Coke products responded by saying, “Thanks for the tips, FDA. Your opinion really matters to us. Now screw off.”

And today you can still buy Diet Coke Plus and it will probably rot your insides, starting with your kidneys. The End.

With this little story in mind, it’s obvious that the new fortified foods consumer research doesn’t matter. If anything, food companies will probably use the data to figure out new ways to pull the rug over the public’s eyes.

If you’re looking for a General in your War on Nutritional Terror, the FDA ain’t no Eisenhower. Furthermore, I wouldn’t trust the companies that make the food either. (Full disclosure: When I’m not blog flappin’ here, I do a lot of work for Beachbody, a company that makes nutritional supplements. As much as I strongly believe in Beachbody products, I don’t want you to trust them either. In fact, I encourage you to scrutinize the hell out of them. Keep my coworkers and me honest, baby.)

Luckily, there are at least a couple of groups out there who have your back. My new favorite is Examine.com, a bad-ass, hyper objective wiki for “supplements, nutrition, fitness, and health” monitored a dietician, a med school student, and a professor of molecular biology. Admittedly, this doesn’t roll off the tongue like butcher, baker, and candlestick maker, but it makes for a much more knowledgeable, vigilant nutrition staff.

If you’re a regular Nerd Herder, Examine.com might be a nice, objective balance to my somewhat opinionated style of advocacy. Case in point, their stance of diet sodas.  I don’t always agree with their points because I tend to include holistic science, sociological information, and whatever-the-hell-I-feel-like-saying in my opinions, but I think it’s important to have more conservative sources of information out there. Well done, Examine.com Nerds! 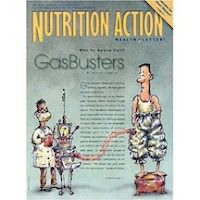 Another great resource is the Center for Science in the Public Interest. They’re more of an advocacy group than Examine and they’re prone to David and Goliath flights of fancy, like demanding that the 2012 Farm Bill actually support healthy food or asking Nestle not to market candy to kids, but they’re also a great source of information.

Their newsletter, Nutrition Action, is especially amazing in that it features Q&As with knowledgeable people about crucial subjects. The August issue, for example, includes an interview with Michael Miller, director of the Center for Preventative Cardiology at the University of Maryland School of Medicine, about metabolic syndrome. It’s not the kind of information you’ll find (anymore) in Men’s Health or Self, but if your thirst for knowledge goes beyond “10 ways to get abs on your abs with a side of abs,” this is the newsletter for you.