Uncategorized, What The Hell Is That?

Time for a little tough love, Fitness Nerd style. If you think eating chocolate will help you in your struggle with weight loss, you’re deluded. I know, I know, there’s that new study in the Archives of Internal Medicine linking frequent chocolate consumption to lower BMI that the media has picked up and distorted with headlines like The Wall Street Journal’s “A Chocolate a Day to Get Slimmer.” As usual, there’s a lot of distortion going on. Case in point, even the WSJ needed to recant its attention-grabbing headline halfway down the article:

But before people hoping to lose weight indulge in an extra scoop of chocolate fudge swirl, the researchers caution that the study doesn’t prove a link between frequent chocolate munching and weight loss.

Huh? Does it make you slimmer or not? Make up your mind, WSJ!

The gist of the study is that about 1000 San Diegans, aged 23 to 85, were polled on how often they eat chocolate. They found that people who claimed to ate a small amount of chocolate 5 times a week tended to eat more calories than those who claimed to eat less chocolate, yet weighed less. However, most media outlets completely forgot to mention that this magic benefit vanished with people who ate more than this moderate amount. (NPR featured one of the few reports that fessed up to this important fact. Go, hippies!)

There are, indeed, benefits to moderate chocolate consumption. Take, for example, this 2007 Italian study of 10,000 people, where medical tests indicated the flavonoid concentration in dark chocolate has anti-inflammatory properties. I can get behind research like that, but what’s with trying to manufacture pop science out of the recollections of a bunch of random Southern Californians? Apparently, the researchers don’t watch House M.D., because if they did, they’d know this: 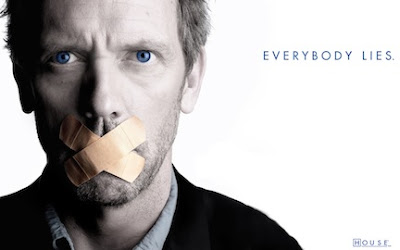 In my experience, both professional and personal, overweight people tend to have a lousy relationship with food, especially high-sugar foods that have been clinically shown to be addictive. There’s a good chance they’re going to fudge the truth, so to speak. It’s not a reflection of their moral character; it’s a reflection of their issues. If you ask an alcoholic how much he drinks, are you going to get a straight answer? If you asked me how many times in a day I visit www.flashyourrack.com, I’d say –

Well, never mind that; it’s off topic. Anyway, even if, hypothetically, they laced the questionnaires with sodium pentothal so that everyone would tell God’s honest truth, they’re missing a massive confounding factor. Was the chocolate a cause, or an effect of the healthy lifestyle?

Could it be that the reason moderate chocolate eaters are less inclined to gain weight is because they understand how to practice moderation in general? I’ve long thought this to be the reason studies on alcohol and caffeine show a benefit from their moderate intake. It’s stressful to ply your body with toxins, but it’s also stressful completely avoiding all indulgences. There’s a reason why monks who take abstinence vows cut themselves off from the world. Avoiding pleasure is hard, hard work, especially in a culture where you’re a 7-11 away from instant access to at least 6 of the 7 deadly sins. (They don’t sell guns at 7-11, so I left out “wrath.” If you’re looking for wrath, try Walmart.)

However, walking the middle road, if you can do it, is about as close as you get to having your cake and eating it too during your time onstage in the Human Comedy. A little chocolate here, a little wine there and not only are you less inclined to binge, but you tend to be less stressed out in general. And, as we all know, stress has a biochemical influence on weight gain.

But as mixed martial arts, Super Big Gulps, The United States Congress, and our burgeoning waistlines prove, moderation is not a thing that Americans do well. In the wake of this “study,” I’m fairly sure that thousands of struggling dieters have embraced the Atkins + Chocolate Eating Plan, where they still avoid carrots and bananas like the plague, but shovel down candy bars like Augustus Gloop looking for the Golden Ticket, assuming that all the HFCS and refined sugar that comes with these confections won’t have a negative impact cuz, like, chocolate is good you, right?

8 thoughts on “Hershey Highway to Hell”