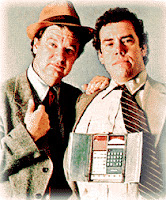 I am often flummoxed by “experts” who claim exercise has no influence on weight loss. Case in point, Gary Taubes writing in the New York Times a few years ago:

Let’s say we go to the gym and burn off 3,500 calories every week—that’s 700 calories a session, five times a week. Since a pound of fat is equivalent to 3,500 calories, does that mean we’ll be a pound slimmer for every week we exercise? And will we continue to slim down at this pace for as long as we continue to exercise?… The catch is that science suggests it’s not, and so the answer to all of the above quiz questions is “no.”

Stuff like this drives me nuts. Taubes has a lot of important things to say about weight loss, but he ruins them by throwing out chestnuts like this. At this writing, the human body is not manufactured by Casio. It is not a calculator. Admittedly, this article is from 2007 and only last year did modern science finally admit that the whole “pound of fat is equivalent to 3,500 calories” is redonkulously over-simplistic. But instead of waxing sarcastic any longer, I’m going to throw down a little study out of Rome showing that exercise benefits insulin-treated obese patients with diabetes.

Stefano Balducci, M.D., from “La Sapienza” University in Rome, and colleagues conducted a subanalysis of 73 insulin-treated patients among 606 sedentary patients with type 2 diabetes and metabolic syndrome. The subjects were randomly selected to either the EXE group (twice-weekly supervised aerobic and resistance training plus structured exercise counseling) or the CON group (counseling only) for 12 months. Clinical and laboratory parameters were assessed at baseline and end of study.

The researchers found that participants in the EXE group had significantly more physical activity than those in the CON group. Following the 12-month period, values for HbA1c, body mass index, waist circumference, high-sensitivity C-reactive protein, blood pressure, low-density lipoprotein cholesterol, and the coronary heart disease risk score were significantly reduced in the EXE group compared with the CON group.

Yes, I understand that these are hardly typical exercisers, but it’s pretty black and white that BMI and waist circumference were affected by a healthy dose o’ cardio and weight training. So I guess it’s a little silly to categorically dismiss exercise as a weight loss method cuz for every study you have, someone else has another two studies saying the exact opposite thing. In other words, the only absolute truth about fitness and nutrition is that there is no absolute truth about fitness and nutrition, so quit being a smarty pants.

4 thoughts on “Exercise: Fat Buster or Fat Waste of Time?”