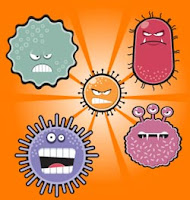 Now that we have that out of the way, let’s get down to business. New research has unearthed an impossibly convoluted way to fight obesity, but before I share it with you, here are a couple quick anatomy lessons.

Lesson one: There are several kinds of adipose tissue (body fat) but the two that apply here are white fat, which is the normal stuff around your gut and butt, and brown fat, which you find in odd places like your neck. Brown fat is considered “good fat” because it promotes the burning of white fat when it gets cold.

Lesson two: Your large intestines are home to billions of bacteria, some vital to life, others destructive to life. It’s your job to eat healthy and maintain the balance between the two. It’s a big responsibility, but I think you’re up to it. I believe in you. Go eat some probiotic yogurt.

Now that we’re all edumacated and junk, we can discuss today’s study. According to the Journal of Proteome Research (which I’m sure you’ve probably already read this month), scientists cleaned out the intestinal bacteria from a bunch of mice and discovered that it seemed to cause their brown fat to fire up and burn more calories. Furthermore…

The research also uncovered major differences in the interactions between males and females and their intestinal bacteria that might help explain why the obesity epidemic is more serious and rapidly developing in women.

Those and other findings may point the way toward approaches that kick-up the activity of brown fat in humans to prevent or treat obesity.

That’s just swell. Basically this means that by futzing with intestinal bacteria (a wildly complex ecosystem on your gut that influences your wellbeing in countless way, many of which we haven’t discovered yet), we might be able to, in turn, futz with a weird kind of neck lipid that might have some impact on fat loss. Awesome, go for it.

While you guys do that, I’m going to publish a study in another medical periodical, the Journal for Obvious Solutions that Science Ignores Because They Don’t Lead To Pharmaceutical Sales. In this study, I’m going to research another organ that might play a key role in the war on obesity: your mouth. Here’s my hypothesis: Stop putting crappy fried foods and refined carbs in it and you’ll lose weight.

That said, it is the holiday season, so if you eat a couple cookies, it’s not the end of the world. Just don’t gorge yourself. Your brown fat hatin’ large intestinal bacteria will thank you.