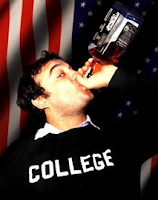 Everyone’s favorite flaccid watchdog, the Food and Drug Administration, made a pathetic swing at doing their job this week by banning caffeinated alcoholic drinks. From The New York Times:

Dr. Margaret Hamburg, the FDA. commissioner, said the drinks appeared to pose a serious public health threat because the caffeine masked the effects of the alcohol, leading to “a state of wide-awake drunk.” After a yearlong review found no conclusive evidence that the drinks were safe, she said, the FDA. decided the caffeine in them was an illegal additive.

The move came largely due to a rash of incidents involving idiot college students who pound the drinks and end up in the ER with alcohol poisoning. So, in other words, this is the federal government’s attempt to curb that pesky problem that’s been plaguing humankind for centuries: Darwinism. Rest easy, America, the FDA is here to make sure stupid people survive to spawn and further dumb down our nation.

Thank you, FDA, for spending millions of tax payer dollars on banning something that the aforementioned idiot college students can recreate in their dorm rooms in about 30 seconds using a jar of Nescafe, a bottle of Stoli, and some sugar. Believe me, they’ll do it. Idiot college students are remarkably resourceful and smart! And if they don’t, they’ll just go back to the old Redbull and vodka standby. Either way, they certainly won’t settle for the 6% to 12% alcohol level of Four Loko and the other newly-banned drinks.

I love the idea of the Food and Drug Administration. I would love them to see to it that the spinach I eat isn’t smeared with shit. I’d love them to make sure my diabetes medicine isn’t going to give me a stroke. I’d like them to verify that genetically altered Frankenfoods are, to use FDA vernacular, “safe.” And if GMOs are safe, I want the FDA to make sure packaging is labeled to let me know I’m eating them.

But the FDA won’t do any of that because they’re a bunch of pansies scared of Big Pharma and Big Agra. They have no problem, however, going after four rinkadink little alcohol manufacturers to makes a couple headlines. I wonder if this ban would have happened if Anheuser-Busch had invented the drinks? It’s swell that the food safety bill is plodding through the Senate and I’m glad they’re working to make concessions for small farmers, but I have a hard time believing it’s going to help much. Do you really think Monsanto execs are losing any sleep right now?

What’s next, Dr. Hamburg? Now that caffeine is an illegal additive to alcohol, are you going to ban Irish Coffee in bars? Kahlua has caffeine in, so is this the end of White Russians?

Enough with the Gutless Nanny State buffoonery, FDA. Go do your job.

One thought on “The FDA makes America safer for morons”