Is gluten really that pollutin’? 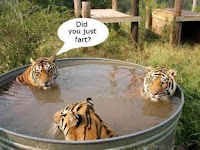 Fellow Fitness Nerd Steve Edwards knocked one out of the park today with his post regarding gluten. Granted, most of you already read Steve’s blog, but I felt it deserved special attention today:

For some reason we love to find scapegoats for our problems. Instead of admitting that we need to re-focus on total image we prefer to allow obtuse minutia to sidetrack us. Perhaps it’s because we feel better if something we don’t understand is causing our health problems instead of the obvious, like we’re eating bad and not exercising. Whatever the reason, society is always on the lookout for the next thing to blame, bringing me to our latest victim: gluten.

It’s amazing how humankind so desperately needs a boogyman. Governments need to prop-up foreign despots as threats to keep the masses under control. If it starts smelling in the elevator, someone’s got to be accused of farting. And if people are unhealthy, there’s got to be one, specific food that’s tearing our insides apart. Sometimes, as was the case with trans fat, there’s some truth to the claims, but most of the time, it’s just a way to sell books and new, fancy, “health” foods. From Steve:

Gluten is basically protein found in grains like wheat, rye, barley. Two decades ago it was championed as a superfood and was the mainstay on the menus of most organic hippie restaurants. Now it’s a vilified to the point where consumers look for “no gluten” labels like they’re the key to eternal happiness. Given the latest research shows between .5 and 1% of wheat eating populations suffer from gluten sensitivity one wouldn’t think the market would be so invigorated. But it all comes down to one thing: $

Steve’s observations actually come from a larger conversation he and I are having about grains in general. I’ve read up on the various anti-grain arguments, and I’m having a hard time finding one that rings true. Are grains really the death seeds many popular diets make them out to be? I dunno. It seems to me that everything “wrong” with grains is also “wrong” with legumes and nuts – and no one makes them out to be evil.

Now, if you’ll excuse me, I just heard a bunch of Paleo Diet supporters howling and running from their caves. I need to take cover before they start throwing sticks and pebbles.

8 thoughts on “Is gluten really that pollutin’?”