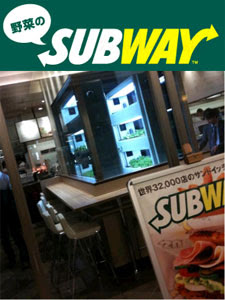 I was super intrigued when I read in Diets in Review that Subway Sandwiches in Japan is experimenting with growing veggies in-store. True, hydroponics on this scale probably require so much water and electricity that they’re hardly ecological break-throughs, but the notion that 5% of the lettuce consumed in the shop came from within seemed kind of cool.

Then, sadly, I read the link at the bottom of the post reminding me that Subway’s “nine-grain” bread is loaded with HFCS.

While there are nine grains in that bread, eight of them are scarce, as they appear on the ingredient listing under the “contains 2% or less” notice. The most plentiful ingredient in this sub bread is white flour, the kind you should avoid.

More plentiful than any one of the whole grains is high fructose corn syrup, a manufactured sweetener that has been linked closely with the obesity epidemic.

And that made me realize that they can grow romaine and carrots until rabbits start attack the store, but it doesn’t matter if they’re not making deeper changes, such as serving decent bread, not serving bottomless sodas, and making sure the other 95% of the lettuce comes from a decent source.

Otherwise, it’s just like putting a spoiler on a Pinto and calling it a Porsche.