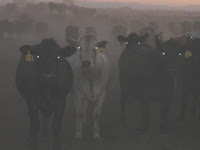 In January, I reported on a study out of Harvard indicating that perhaps saturated fat wasn’t so bad after all. Well, hold on a second before you tuck into that blue cheese Big Mac. While saturated fat may still be vindicated, it looks like the naturally occurring trans fat in cow and sheep products may be problematic.

For those of you who weren’t aware of naturally occurring trans fats, they’re created in the rumens of cows and sheep and are passed on to their meat and milk. Two things that bother me about this are 1) it’s trans fat and 2) it serves as a grim reminder that anything cow-related that you eat passed, at some point, through its several stomachs. Gross.

But I digress. Long story short, researchers out of VU University in Amsterdam reviewed several studies looking at trans fatty acids in their various forms and discovered that, regardless of origin, they still appeared to tweak cholesterol.

Based on this overview we speculate that all fatty acids with one or more bonds in the trans configuration raise the ratio of LDL to HDL cholesterol irrespective of their origin or structure. Thus, our results provide an additional argument besides the high content of saturated fatty acids to lower the intake of ruminant animal fats.

I’m completely fascinated to hear how Atkins and paleo supporters are going to respond to this. They’ve put a lot of energy into vilifying trans fat instead of sat fat and now, ooops!

As far as I’m concerned, the only thing cows are good for is leather, but if we just used them for that, then we’d have a bunch of skinless cows walking around and that wouldn’t be fun for anyone, especially the cows. You can’t win.