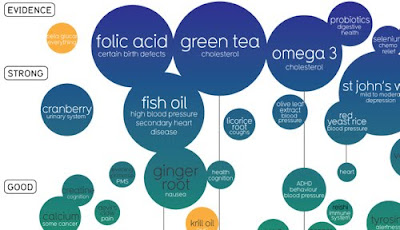 There’s a definite Wild West aspect to the nutritional supplement world. They’re largely unregulated and although the smarter marketers send out their Alpha Omega Fruitzilla Fluffing Compounds (or whatever) with a host of studies backing them up, you still don’t know what you’re getting. Studies are easy to corrupt or misrepresent. As a general rule, if the research backing your supplement came out before the advent of the Civil War, it’s probably questionable, but other than that, who knows?

Apparently, the folks over at Information is Beautiful do, so they’ve compiled this magnificent graph charting the various supplements. The bigger the circle, the more popular they are. The higher up they are, the more they kick butt.

And as a bonus, here’s the information I is B used to compile the graph.

But as groovy as this intel is, there are a couple things I’d like to point out. First, there’s a difference between using a micronutrient (vitamin or mineral) as a nutrient and a using it as a supplement. Vitamins A and E may have fared poorly as sups, but they’re still vital nutrients for human life so you should still make sure to get your RDA. Keep that in mind before you chuck out your Flintstones Completes.

Secondly, just because a supplement isn’t supported by overwhelming evidence doesn’t mean it won’t do you right. Echinacea and vitamin C may fall under “Conflicting” here, but they’ve both helped me get through many a cold and flu season, so I’m not giving up on them any time soon. Unlike pharmaceuticals, taking most sups for a test run can be done cheaply, so there’s no harm in giving it a go.

Unless it’s, like, chewable plutonium or something, then I’d probably give it a pass.