Did his hair count in those 182 pounds? 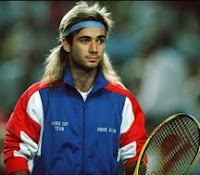 Here’s an interesting article in the New York Times about how athletes perform best when they figure out their natural weight. The bulk of the article is about runners, who generally run faster with less meat on their bones, but need to be careful not to lose too much weight, lest they burn their own muscle for fuel, thus compromising performance.

The article reminded me of this new study out of Australia showing that people over 70 who were 5-10 pounds overweight tended to live longer.

In a sentiment similar to one I often trumpet on The Real Fitness Nerd, I’m not sure if it was the weight keeping those oldies from keeling over. Maybe it was the fact that they didn’t stress about it too much and thus appreciated that second glass of Pinot Gris on a hot summer night.

Either way, the article and the study make an important point. Instead of measuring inches and pounds, we’d be better off listening to our bodies and finding a weight that feels right. The NYT article discusses how Andre Agassi, at 5’11.5″, played best at between 178 and 182 pounds, but he and his trainer, Gil Reyes, didn’t make that the center of all things:

Mr. Reyes said that he and Mr. Agassi learned not to let the scale rule your life. “We had a little bit of a phrase,” he said. “The weight scale to most human beings can be like a Ouija board. It can start messing with your head.”

The trick is not to let it.