The salvation of saturated fat. 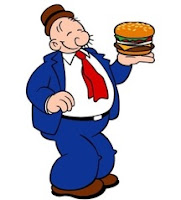 It looks like that daily meatball sub wasn’t what stopped Uncle Mort ticker last July after all. According to a new study from Harvard and the Children’s Hospital Oakland Research Institute, saturated fat isn’t a factor in heart disease. From the study’s abstract:

A meta-analysis of prospective epidemiologic studiesshowed that there is no significant evidence for concludingthat dietary saturated fat is associated with an increased riskof CHD or CVD. More data are needed to elucidate whether CVDrisks are likely to be influenced by the specific nutrientsused to replace saturated fat.

Cool, I guess. Although our already-fat country is just going to use this as an excuse to get fatter. Moms across the nation will be leaving the skin on their Chicken ala Rice-a-Roni, without considering that if they do that, they need to lose the fat somewhere else on the menu.

And even if you do balance the macronutrients, saturated fat may not be bad for you, but it’s not good for you like unsaturated fat, with all the omega fatty acids, etc, so you’re replacing a beneficial food with an “acceptable” food. It’s like divorcing Angelina Jolie to marry Olive Oyl.

Speaking of olive oil, I am, however, probably going to start eating real butter again, simply because it’s more of a real food than the weird olive oil-based spread I’ve been dupped into eating. I already eat enough olives in addition to the spread to fuel an Italian Army Garrison, so I’m not too stressed.

8 thoughts on “The salvation of saturated fat.”