Drink your juice and get big as a moose 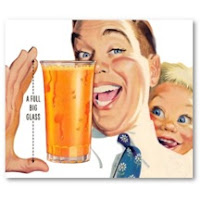 One of the worst recurring fights I have with my 5-year-old is the Battle of the Juice. She wants the stuff all the time. I perpetually try to regulate it. A little juice is okay, but gallons of the stuff? I think not.

Of course, when the topic comes up in the presence of other parents, things only get worse. “What’s wrong with you?” they demand, rolling their eyes at the pathetic hippie dad. “Juice is good for you! It’s the nectar of the Gods!”

I explain that juice is fruit striped of fiber, so it causes sugar spikes just like soda. Furthermore, it provides vast sums of calories quickly, which makes it a huge contributor to America’s increasing obesity problem. Sure, it’s got vitamins and minerals, but the vehicle is flawed. I could put micronutrients in heroin, but you’re still not going to shoot up your kids with that, are you?

They never have a counter argument to this (I think the hard drug reference throws them). But my point is never heard. After a silent, disbelieving beat, they just retort, “But it’s juice!”

So it was with a happy heart that I finally found back-up in the form of this Los Angeles Times article.

A glass of juice concentrates all the sugar from several pieces of fruit. Ounce per ounce, it contains more calories than soda, though it tends to be consumed in smaller servings. A cup of orange juice has 112 calories, apple juice has 114, and grape juice packs 152, according to the U.S. Department of Agriculture. The same amount of Coke has 97 calories, and Pepsi has 100.

And just like soft drinks, juice is rich in fructose — the simple sugar that does the most to make food sweet.

UC Davis scientist Kimber Stanhope has found that consuming high levels of fructose increases risk factors for heart disease and Type 2 diabetes because it is converted into fat by the liver more readily than glucose. Her studies suggest that it doesn’t matter whether the fructose is from soda or juice.

I love this article. It goes on to explain the history of juice and even tries to be somewhat objective.

A 2006 study of 971 low-income youngsters found that each extra glass of juice a day caused children who were already overweight or obese to gain an extra pound each year.

The link between juice and weight gain isn’t always found, however. In a 2008 review of 21 studies, six supported the connection and 15 did not.

In fact, several researchers have linked juice to healthier diets and lower weights. A 2008 report of 3,618 children ages 2 to 11 found that kids who drank at least 6 ounces of juice a day consumed less fat and more vitamins and minerals than kids who drank no juice at all.

But many experts say the data simply reflect a correlation between juice and healthful diets, not a causal relationship.

And for the record, there’s an ocean of difference (literally) between 6 ounces of juice and the supertanker tumblers I see kids suck down daily. I’m comfortable with my daughter drinking 6 ounces. But that whole silly moderation thing seems lost on many parents.

And, in all fairness to Steve’s idol, Jack Lalanne, if you’re super-fit and your body supports a 4000-5000 calorie diet, fresh-squeezed juice is a good way of making up some of those calories. But there’s just no place for juice in the modern child’s fiber-poor, calorie-rich diet.

My favorite part of the article is the conclusion:

Dr. Frank Greer, who spent 10 years on the American Academy of Pediatrics’ nutrition committee, said he “can’t imagine” the group would ever downgrade juice to the status of soda.

“It’s such a normal part of the American diet,” Greer said. “A glass of fresh-squeezed orange juice for breakfast, my goodness!”