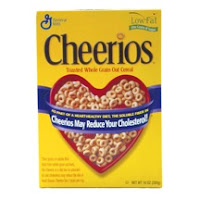 I don’t know who spit in the Food and Drug Administration’s beer, but they’ve gone absolutely feral lately. A couple weeks ago, they threw down on the makers of Hydroxycut. This week, they seized $1.3 million in illegal bodybuilding dietary supplements, including steroids, from LG Sciences in Michigan.

But wait, there’s more! Today they also issued a nastigram to General Mills, the makers of Cheerios, stating that a number of health claims on the popular breakfast cereal’s packaging aren’t appropriate, including, “you can lower your cholesterol 4% in six weeks.” According to the letter, only FDA-aprroved drugs are allowed to make claims like this.

General Mills’ public response to the smackdown can basically be summed up as follows: “Um, you guys were cool with us saying that for, like, 12 years, so we don’t know what the big deal is, but whatever. We’ll change it.”