Hydroxycut not so foxy. 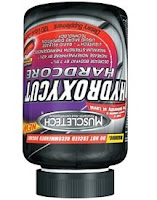 In an unusual show of cojones, the FDA has officially recalled everyone’s favorite overpriced mega-caffeine pill, Hydroxycut. From the FDA press release:

Liver injury, although rare, was reported by patients at the doses of Hydroxycut recommended on the bottle. Symptoms of liver injury include jaundice (yellowing of the skin or whites of the eyes) and brown urine. Other symptoms include nausea, vomiting, light-colored stools, excessive fatigue, weakness, stomach or abdominal pain, itching, and loss of appetite.

Jaundice? Wow! You gotta love it when a 21st century weight-loss supplement causes an ailment commonly associated with 18th century British sailors.
Maybe if they formulate an Hydroxycut Limeade*, it’ll fix the problem.
*That’s a little historical joke. Citrus prevents jaundice, so oldey timey English sailors were given lime juice rations, which is why they’re called “limeys.” While we’re on the topic and since this is a footnote, so I guess it’s okay to waffle on, many sailors refused to drink their lime juice because, well, I don’t know if you’ve ever had straight lime juice before, but yuck. Anyway, the sailors were given rum to drink with their lime juice, which is basically the origin of the daiquiri. I could go on, but this is getting silly, even for a footnote.
FDA, supplements

4 thoughts on “Hydroxycut not so foxy.”